Conflicts — is NPRC a people’s Commission?

The National Peace and Reconciliation Commission came out of the people’s Constitution of 2013 Amendment number 20 Chapter 12 part 6, section 251 which provides for the establishment of the commission.

The idea of adopting a comprehensive bottom-up approach that involves the participation of affected communities was mooted at Africa level. It was agreed that Africa was experiencing violent conflicts and there was need to adopt new approaches in dealing with the said conflicts as previous methods of intervention after the conflict were ineffective and costly.

The new approach was to adopt a comprehensive fashion in dealing with conflicts which means conflict transformation had to deal with past violent conflicts, manage current and unfolding conflicts as well as prevent future conflicts developing into violent ones.

The third aspect of conflict transformation adopted by Africa was to address the root causes of conflicts. To avoid conflicts recurrence, it is imperative to address the root causes. The last aspect was the need for each government to fund the healing process in its country. This would demonstrate its political will and commitment in resolving conflicts. There must have also been fear that if foreign governments took full responsibility to resolve conflicts of another nation, they may dictate the kind of justice they wish rather than what local communities desire. It is against this background that Zimbabwe put constitutional provisions to set up the NPRC.

The NPRC is an independent commission. The independence of the commission sets it apart from other national healing arrangements like government-led Truth for Reconciliation Commission of Thailand (TRCT) or International Commission of Inquiry for Burundi or Cabinet-led Organ for National Healing Reconciliation and Integration. The law provides that the commission is not subject to the direction or control of an individual and must act without fear, favour or prejudice. This means that it is not directed by donors, civil society, churches, government or any such. The said stakeholders have a constitutional obligation to assist the commission in dispensing its mandate without influencing its work.

The commission’s mandate is to deal with past conflicts as enshrined in its function (a) which talks of dealing with post-conflict justice, (c) which encourages people to tell the truth about the past and (e) which says persons subjected to persecution, torture and other forms of abuse should receive rehabilitative treatment and support. These provisions were interpreted by the commission as aspects of dealing with the past. Other functions of the commission also deal with the current like function (b) which seeks to promote national healing, unity and cohesion in Zimbabwe and the peaceful resolution of disputes. Function (d) seeks to facilitate dialogue among political parties, communities, organisations. There are also provisions that deal with preempting future conflicts which gives its mandate a comprehensive approach in dealing with national conflicts.

The legal provisions do not prescribe how far back the commission will go in facilitating the resolution of conflicts. This is both a blessing and a curse, in that the NPRC will be able to address the root causes of conflict which are rooted in pre-independence particularly the colonial period while a curse is because it becomes expansive whose management is cumbersome given the limited timeframe to resolve the conflicts.

This helps to explain why the commission has a national outlook. The healing and reconciliation process belongs to the entire nation. NPRC merely facilitates and co-ordinates the process. It, therefore, means that despite our ethnicity, geographical boundaries, race, colour, language, religious persuasion, gender among other issues, we all constitute the nation of Zimbabwe and the commission as an institution has a national mandate to make sure that Zimbabwe is healed and there is reconciliation despite our differences.

But, why is there a commission when there is no war in the country? It should be appreciated that peace is not just the absence of violence or war but positive peace which involves the presence of the attitudes, institutions and structures that create and sustain peaceful societies.

Therefore, positive peace creates the optimum environment for human potential to flourish. Every nation desires its people to reach their full potential and contribute fully to the development of the country. It is, therefore, imperative that governments invest in resolving conflicts and hindrances that retard the realisation of such full potential.

Positive peace has a higher value and includes pillars like a well-functioning government, equitable distribution of resources, free flow of information, good relations with neighbours, high levels of human capital, acceptance of the rights of others, low levels of corruption and a sound business environment.

It is in this regard that the Transitional Stabilisation Programme underlines the need for national peace in order for development to take shape. (Re)building credible and effective institutions working for the common good which includes strengthening the legal framework that governs the country, enabling the State to fulfil its responsibility to protect each of its citizen, to develop policies for a sustainable constructive management of diversity and generating a new public discourse based on equal rights, acknowledgement and responsibility among others.

The implementation of the 10 functions of the commission will lead to national healing and reconciliation. Healing deals with the psychosocial support given to people who have been affected, traumatised by past conflicts, while reconciliation is an over-arching process which includes the search for truth, justice, forgiveness, healing and so on. At its simplest, it means finding a way to live alongside former enemies — not necessarily to love them, or forgive them, or forget the past in any way, but to coexist with them, to develop the degree of co-operation necessary to share our society with them so that we all have better lives together than we have had separately…(It) is built on respect and a real understanding of each other’s needs, fears and aspirations, the habits and patterns of co-operation that we then develop are the best safeguards against a return to violent division.

It is against this backdrop that the NPRC will produce a series of articles to explain each step of the way of the strategic direction and implementation modalities to ensure that Zimbabweans are informed and walk side-by-side with the commission in dispensing of its mandate. 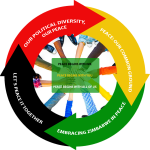