Virtual Launch of the Women Political Training and Mentorship Programme

The National Peace and Reconciliation Commission (NPRC) participated at the Virtual Launch of the Women Political Training and Mentorship Programme which was hosted by the Zimbabwe Gender Commission in collaboration with the UN Women. Representatives from political parties such as Zanu PF, MDCA and MDCT were panelists in the discussions, from the Civil Society Organisations, Women’s Coalition of Zimbabwe gave solidarity remarks. Participants had an opportunity to share their observations on gender equality and women’s involvement in politics.
The NPRC Victim, Support, Gender and Diversity (VSGD) Thematic Chairperson, Commissioner Nomaqhawe Gwere presented her solidarity message and the Minister of Women Affairs, Community and Small and Medium Enterprise Development, Honourable S. G. G. Nyoni delivered the keynote address. The VSGD Chairperson pointed out that the NPRC Act mandates the Commission to mainstream gender and protect women and other vulnerable groups from violence. She further stated, “The NPRC Act emphasises on the development of procedures and institutions to facilitate dialogue among political parties, communities and other groups in order to prevent conflict and disputes.”
The VSGD Chairperson also highlighted on the issue of violence in politics and the abuse of social media and communication technologies that further presents opportunities for violence.
The Complaints Handling, Investigations and Legal Department (CHIL) noted with concern that most victims who seek recourse from the Commission are women, firmly establishing evidence from community dialogues conducted by the NPRC under the Women Safe Spaces Programme that indicate that many women are affected by election related conflicts and violence.
Commissioner Gwere also told the meeting about the establishment of the National Conflict Early Warning and Early Response (CEWER) system which is one of the strategies that the Commission has considered key to ensure structural, systematic and operational prevention of violence and conflict. She said that the CEWER system has clear Gender Specific Indicators as well as political and elections conflict related indicators.
Commissioner Gwere also told participants that many activities have been lined by the Commission and these include engaging in dialogue with key stakeholders such as political parties, traditional leaders, churches and faith-based organisations, youths and civil society organisations with the aim of instilling tolerance, inclusivity and ultimately violent free and peaceful elections conducive for women’s participation among others. 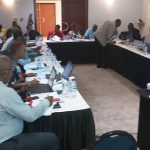 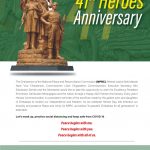